Also check out The MUD Coder's Guild, it's a slack team devoted to developing MUDs.

The biggest change (so big I reset characters on MidMUD) is being able to hone your basic stats. I got rid of your class boosting your stat a certain amount each level along with your level being added. It now increases each stat by 1 each level, and the top two stats get an extra point. The top two stats are chosen that level by the skills you used. If you use something that uses a lot of strength, your strength will go up faster.

To further customize your character, you can hone them. This uses your gained experience points and "spends" them on increasing a stat by 1 (or 5 if it's health/skill.) See more information on the help for hone.

The web client got a very big update, commands are now clickable! As part of a semantic color update, I start sending {command}help config{/command} instead of {white}help config{/white}. This lets the web interface know that you can click those. The game can also send a different command to send when clicking a command, so you can have display text and the command itself. 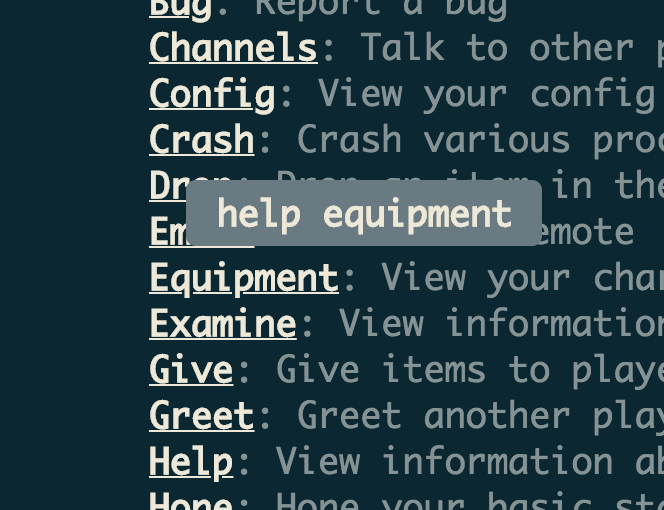 I added a small "blog" to the home page that lets admins post announcements about the game. You can sticky posts and write in markdown. There is an atom feed that is linked from the homepage so players can subscribe without knowing the feed URL. You can also simply not publish them to preview them on the home page as an admin.

Here is a sample announcement.

A hint system was introduced as a simple form of tutorial. For instance, after receiving your first tell each sign in you will see a message such as You can reply with reply my message. With this I introduced a player configuration system to disable these messages.

Also in the config system is disabling regeneration notices, changing your prompt, and setting the pager size. See more information at MidMUD's help.

I played some of the tutorial from Discworld Mud and I was inspired to add in a say to and whisper set of commands. Whispering sends your message to only the character it is directed at and everyone else sees only that you're whispering to each other. Say to directs a message at someone in the room for all to see.

Later, I was looking over the cheatsheet for CurryMUD and saw all the cool emote and say features it has. This inspired me to add in speaking at someone (in a cleaner fashion) and adverb phrases. I am very happy with how this feature turns out. You can be much more expressive in local chatter now. Adverb phrases also carries over to channel chat.

Several process crashing bugs were found, luckily no player was disconnected because of them. The worst one was sending in not an integer into quest info. Ecto was not happy about that. Other bugs include:

I didn't do the extra detail of the world like I had hoped last night, but I am pretty happy with what did get done instead. I think in the next month I want to have more game elements in place. Maybe data defined damage types.