This post was originally published on the SmartLogic Blog. 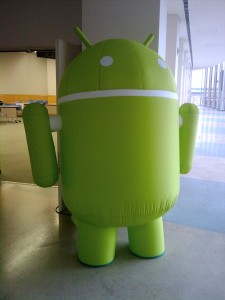 Writing a medium to large Android app requires having code structure. In creating our latest Android development project, I came across a structure that has helped me out.

I like to have separate files for each class in my Android projects, the only exception being AsyncTasks. Having this many java files means you have to have more packages than the base package. I ended up with a package for each type of main class. Each class is named ending with its type.

The layouts folder can easily become disorganized since you can’t have any folders in it. This is a known issue and has been ignored for 4 years now. To get around this I name my layout files with a prefix depending on what they are for. This sorts them together in the Eclipse file listing.

All of my IDs are snakecase. I had a project that was inconsistent with how IDs were named and it was a pain. Many projects seem to do mixedCase notation for IDs, but it seemed weird having the different styles in Java code depending on what type of resource it was, e.g. R.layout.snakecase vs R.id.mixedCase.

For values I have a separate file for each type of resource, e.g. dimens.xml. This works out well for most of the values, except for strings. There are a large amount of strings in this app and having them all in the same file is pretty unusable. In this case I split out some of the strings into groups by their activity. This allows you to easily find a string if you’re looking at the activity already.

How do you structure your code for Android development projects? Comment and let me know.