So far I've shown off the nitty gritty of my bramble. In this post I want to give an overview of it. 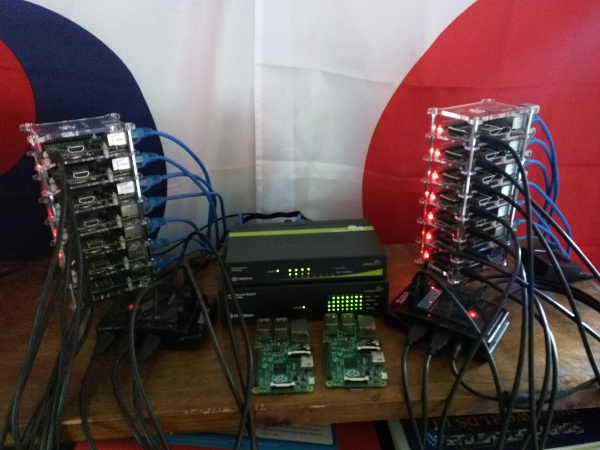 All of the pis live on a separate 192.168.x.x than the rest of my network. This allows me to easily identify them. The entire network is under a CIDR /16 subnet so everything can talk to everything else.

The case I picked for the pi lets me stack to 7 comfortably. 7 also happens to be the number of ports on the USB hub. The ethernet switch, which has 16 ports, is also set up nicely with 7. You can fill the switch and still have room for connecting to other switches for chaining.

I have a few types of hosts: build, redis/memchaced, postgres, file server, and docker host. All of the hosts are labeled. If I didn't label them they would be instantly lost if I tried to find a single one.

This server creates the docker images that are hosted in the registry also located here. Every docker host pulls from its registry. More information about the build server is located in the Git Push with Docker post.

I originally had these as separate servers, but I had so much free memory that it made sense to shove them together and get another docker host out of it.

This server has postgres installed. I have it listening on IP and only allowing the Raspberry Pi subnet to talk to it. Backups are manual at the moment, and given the ability of the Raspberry Pi to corrupt the memory card it's top of my mind to fix the situation.

These servers (4) are running gluster. They are set up to host volumes with a redundency of 2. I have tested this failure rate when one of the raspberry pis got a corrupted file system. Upon restoring a fresh install of linux I corrupted the gluster cluster almost to the point of total loss.

There are 7 of these right now. The last 2 are empty and test beds for updating Arch. They simply have docker installed and will pull down images and run them. More information about these are located in these posts: Docker Raspberry Pi Images, nginx Docker Container, and Git Push with Docker.

There are a few improvements I'd like to do with the bramble in a more general sense. Cable management is one of my top concerns. All of the cables I have are about 3ft long, which I had bought before the cases and new what the final setup looks like. Getting shorter cables will help make the bramble look nicer than it currently does.

General logging is also something I want. Right now logs are very hard to get to. There is no heroku logs --tail. I want to set up something like graylog2 or if I get elasticsearch up logstash. Most of the problem with getting these going is the current docker images are built for x86 not ARM. I just haven't had time to look into this yet.